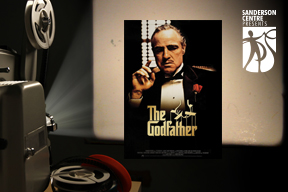 The Godfather is a 1972 American crime film directed by Francis Ford Coppola, who co-wrote the screenplay with Mario Puzo, based on Puzo’s best-selling 1969 novel of the same name.  This is the first installment in The Godfather trilogy. The story, spanning from 1945 to 1955, chronicles the Corleone family under patriarch Vito Corleone (Marlon Brando), focusing on the transformation of his youngest son, Michael Corleone (Al Pacino), from reluctant family outsider to ruthless mafia boss.