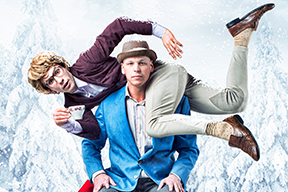 Hailed as “a child’s imagination on steroids” by London Free Press and “a masterpiece of physical comedy” by Theatre In London, critics rave for the charismatic James & Jamesy. A must-see performance on the international comedy circuit, this unstoppable duo is regarded as “one of the most popular fringe duos ever” (CBC).