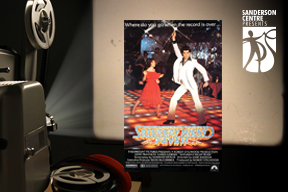 Saturday Night Fever is an American dance drama film directed by John Badham, produced by Robert Stigwood and stars John Travolta. Tony Manero (Travolta) is a young Italian-American man from the Brooklyn borough of New York who spends his weekends dancing and drinking at a local discotheque while dealing with social tensions and general restlessness as he feels directionless in life and trapped in his working-class ethnic neighbourhood. The film features music by the Bee Gees and many other prominent artists of the disco era.