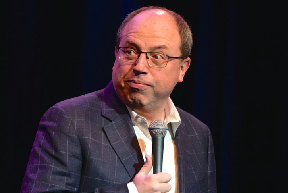 BRENT BUTT returns to the Sanderson Centre stage! From his humble roots in Tisdale, Saskatchewan, Brent Butt has soared to iconic status in Canadian comedy. Known as one of the nation’s funniest comedians, Brent has performed at the world’s most prestigious comedy festivals, toured internationally and created and starred in the well-known television sitcom Corner Gas. Don’t miss this evening of hilarious stand-up comedy!