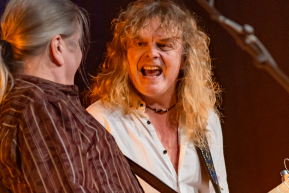 Carl Dixon Sings the Guess Who

CARL DIXON SINGS THE GUESS WHO – FEATURING FORMER MEMBERS OF THE GUESS WHO
Carl was lead singer of The Guess Who for eight years (replacing Burton Cummings after he left the band) and long-time front man of Coney Hatch. A shocking car accident in 2008 left Carl clinging to life. Incredibly he survived and even rejoined The Guess Who for two special shows in 2016. Carl's show features former members of The Guess Who, including Bill Wallace who co-wrote some classic hits. It's a night of brilliant songs, the stories behind the music played true to the original Guess Who sound.